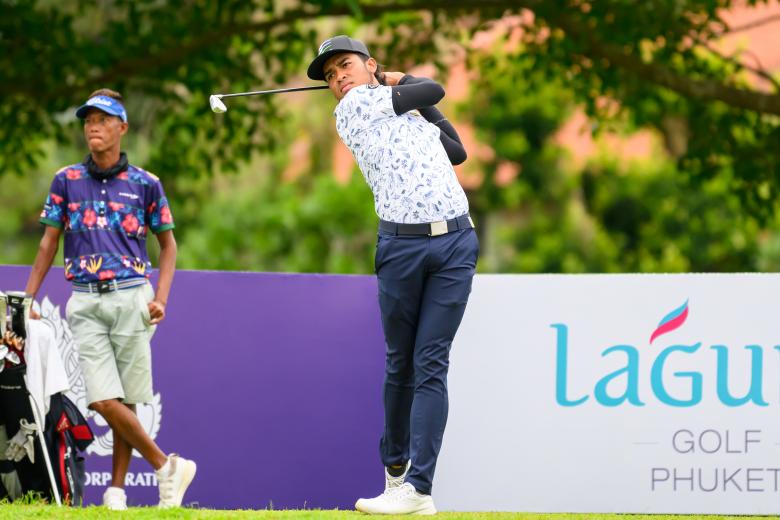 By Kent Gray
Shahriffuddin Ariffin doesn’t want to look back nor get ahead of himself. Neither feat will be easy to accomplish as he takes a four-stroke lead to bed ahead of the final round of the $75,000 Laguna Phuket Cup on Tuesday.

The 22-year-old Malaysian is on the cusp of a second Asian Development Tour (ADT) title after backing up an opening 64 with a sensational eight-under 62 at Laguna Golf Phuket on Monday to wrestle control of the Beautiful Thailand Swing (BTS) event on 14-under par.

Thitipan Pachuayprakong is Ariffin’s closest pursuer heading into the final round at -10 following rounds of 64-66 while another Thai, Sarun Sirithon, is joined by Sweden’s Calle Strandberg and Japanese-American Ryoto Furuya a stroke further adrift.

Given the low scoring and preferred lies in play at Laguna Golf Phuket, it will take something extraordinary for the player further down the leaderboard to contend, especially if Ariffin can continue his current hot streak.

He finished T-13 at the Laguna Phuket Challenge last week with rounds of 68-68-66 and has continued his impressive downward trend in the opening 36-holes. Indeed, he has been trending nicely ever since a T-8 placing at the Asian Tour’s SMBC Singapore Open in January and won the PGM Maybank Championship at Saujana Golf & Country Club in late March. Ariffin won the Malaysian PGA Tour event by three strokes, notably with a confidence-inducing final round of six-under 66.

It all adds up to the belief that he can get the job down on Tuesday and add to his maiden ADT win at the 2018 PGM Labuan Championship in Malaysia. Then again, Ariffin is trying desperately not to think about that.

“I’m very excited but right now I don’t want to think about it [winning],” he said.

“My game plan tomorrow is just to keep hitting fairways and greens and just go from there. That’s all.”

Ariffin found his driver a little un-cooperative in the opening round but had no such issues on Monday. He got off a sizzling start with a birdie from two feet on the 1st and another from seven feet on the second but left the highlight till the 9th when he hit driver-3 wood to a foot and holed the tiddler for an eagle three to turn in 29 strokes. In all his card was blemish-free with six birdies to go with the pretty eagle.

“I’m hitting it very well, lots of fairways, a lot of greens and my putting is also working…there were only a few holes I was confusing the line, that’s all.”

Jesse Yap soared up the leaderboard to a share of sixth on eight under after matching Ariffin’s 62 with a round that featured eight birdies – including five on the trot from the 10th. The Singaporean, who lead after the first round of the Laguna Phuket Challenge and eventually finished T-13 alongside Ariffin, is a combined 16-under for five circuits of Laguna Phuket and will hope to put some clubhouse heat on the leaders with another low round.

Laguna Phuket Challenge winner Tom Sloman is at five-under after a Monday 66 and enjoys a three-stroke lead over fellow Englishman David Langley in the MENA Tour’s race within the wider BTS race.

The eventual winner of the MENA Tour’s 2020+ Journey to Jordan Order of Merit race, which will be completed at the end of the BTS following two further events at Blue Canyon Country Club, will earn an invite to one of the Asian Tour’s new $1.5 million+ International Series events later this year.

England’s David Hauge, currently third on the J2J OOM missed the cut which was made at two-under.