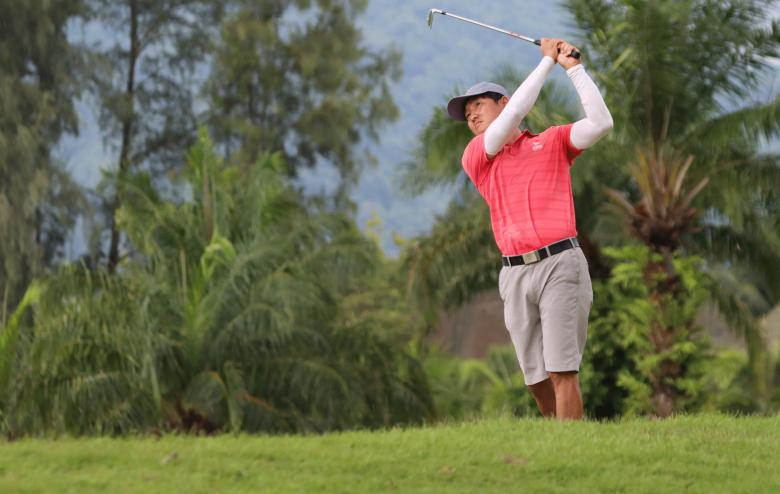 By Kent Gray
With a fourth placing at the Western Australian PGA Championship sealed three days before he landed in Phuket, Sam Lee justifiably felt like he was “coming in hot” for the Beautiful Thailand Swing.

It turns out the 31-year-old Fijian’s form wasn’t the only thing warm, an obligatory temperature check and PCR test on arrival at Phuket International confirming a positive COVID-19 result.

With that, Lee’s prep for the Asian Development Tour-MENA Tour co-sanctioned swing was turned on its head. Instead of hitting Laguna Golf Phuket for some reconnaissance practice, he was confined to barracks at the official BTS hotel for two days and then moved to a dedicated quarantine facility.

His mandatory isolation period mercifully ended on the morning of the first event but Lee couldn’t help feeling more than a little jinxed as the Laguna Phuket Challenge got underway in typically tropical conditions.

“I was last off at 1:10pm and I show up to the tee and the horn blew for a weather delay,” says Lee picking up his own hard-luck story.

The second delay was longer and meant Lee was one of those who had to come back early the next day to finish his first round. Somehow through all the disruption, he managed to compile rounds of 67-67-71 for a five-under total and a share of 21st place. You could say it was US$753.21, minus tax, hard earned and well deserved.

Thankfully, the two days since have proved incident-free, unless you count some lovely ball striking and putting in a confidence-boosting practice round for the second leg of the BTS, the Laguna Phuket Cup, starting on Sunday.

“I mean I've played three rounds and we're playing the same course for the Laguna Phuket Cup, and I've played a practice round today so I know the course a little better. So if I can just make a few more putts I should do pretty well.”

Lee is definitely a player to watch on the ADT this season as evidenced by his performance at Kalgoorlie Golf Course in the PGA Tour of Australasia event en route to Phuket.

“As of now I only have status on the Asian Development Tour so I’m just trying to make my way up from this tour to the Asian Tour,” Lee said.

“I might do a few other Q-Schools later in the year and see where I go but if you finish in the top seven on the Asian Development Tour you get a card on the Asian Tour and yeah I mean, the Asian Tour has grown quite a bit in the last few years, so yeah, it's going to be good alright.”

With Dodge Kemmer making the cut at The 41st GS Caltex Maekyung at Namseoul Country Club in Korea on the main Asian Tour, the American’s slender lead in the ADT Order of Merit race looks sure to evaporate at the Laguna Phuket Cup.

Thailand’s Chanat Sakulpolphaisan and Poosit Supupramai, in second and third place on the OOM, will resume their battle for pole position after finishing T-9 and solo second respectively at the Laguna Phuket Challenge.

Laguna Phuket Challenge champion Tom Sloman, meanwhile, has his own OOM challenge to ward off. The 25-year-old Englishman ascended to the summit of the MENA Tour’s ‘2020+ Journey to Jordan’ standings with his five-stroke victory in the BTS opener but has good mates David Langley and David Hauge nipping at his heels, just $961 and $2134 adrift respectively.

So are you feeling any pressure Tom, especially with a start in one of the Asian Tour’s new $1.5million+ International Series on the line for the Journey to Jordan champion set to be crowned at the conclusion of the BTS?

“There’s no pressure now at all, the most pressure was probably this week and I’ve done that now, so yeah, no pressure at all,” the former Walker Cupper said after claiming his first win in an OWGR event.

“I think I’ll take a couple of days off now, I’m not going to hit a ball and yeah, we’ll just tee it up on Sunday and see how it goes again.