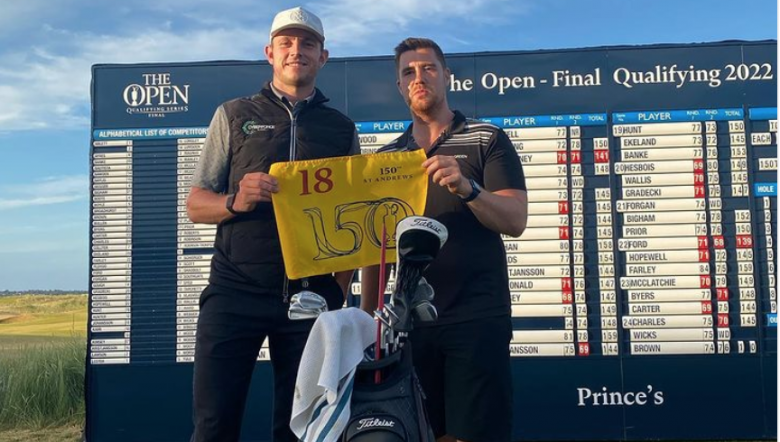 By Kent Gray
MENA Tour member Jack Floydd has described qualifying for the historic 150th Open Championship at St. Andrews as a “feeling like no other”.

The Englishman secured one of 16 places available in final qualifying across the UK on Tuesday after emerging from a five-way playoff for the last of four spots available at Prince’s Golf Club in Sandwich, Kent.

Floydd, who produced several eye-catching rounds during the recent Beautiful Thailand Swing in Phuket co-sanctioned by the Asian Development Tour including a top-15 finish at the Blue Canyon Open, carded a two-under 142 total after rounds of 71-71 at Prince’s. He then birdied the first hole of the playoff to advance to the July 14-17 Open to be staged on the Old Course, posting on social media that it was “a feeling like no other”.

“I played very solid all day and putted really well which was required today given the wind,” the Haywards Heath-attached pro, who won his regional qualifying event at Frilford Heath Golf Club, told Open.com.

Bailey Gil was the next closest of the other MENA Tour players involved in final qualifying, rounds of 74-69 seeing the Englishman finish T14 at St Annes Old Links.

David Langley, second in the 2020+ Journey to Jordan Order of Merit standings behind Sloman, saw his St. Andrews dreams fade with rounds of 78-75 for a nine-over total and a share of 38th place at Fairmont St. Andrews while another Englishman, Joshua Grenville-Wood, was noted as a WD at Hollinwell despite posting on social media that he had spent 11h 12m on course "without even a five-minute break between rounds”. The post was ended with a #Lovinlife hashtag and accompanied by a Pinocchio emoji.

For full details of final qualifying for the 150th Open Championship, visit Open.com