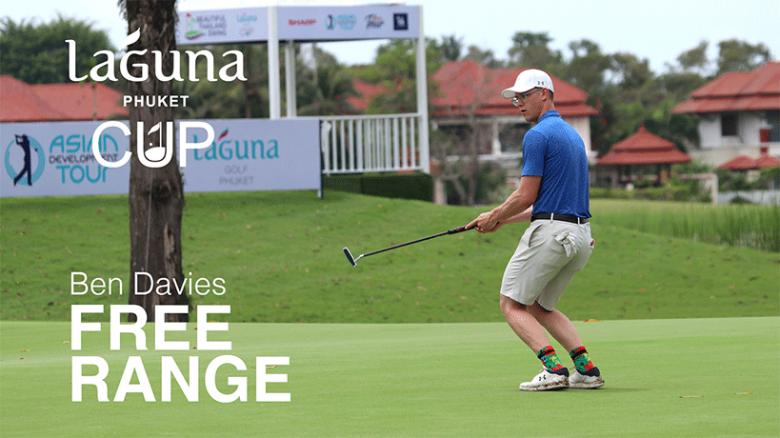 By Kent Gray
Ben Davies has taken MENA and Asian Development Tour (ADT) fans behind the scenes like never before at the Beautiful Thailand Swing and given an equally fascinating insight into the touring life for a pandemic-stalled mini-tour player.

The 27-year-old Londoner agreed to be mic’d up ahead of his second round at the Laguna Phuket Cup on Monday to share how he prepares for a professional event.

From arrival on one of Laguna Phuket Resort’s open-air buses, to the range, practice green, 1st tee (the 9th in his case on Monday) and beyond, the Wimbledon lad gave a snap-shot of what it takes to perform when your bank balance depends on it.

Sadly an even-par round of 70 wasn’t enough for Davies to make the cut, meaning he’s now 0-2 in Phuket in the co-sanctioned events.

The disappointment mirrors the frustration the MENA Tour member (who has affiliate status on the ADT) has experienced ever since leaving the safety net of the amateur game.

“I turned pro in 2019…four weeks before Covid,” Davies revealed. “So that was interesting.

“My career could do with a kickstart, which is why these events are so good as you learn so much.”

Davies has committed to playing Asian Tour Q-School in the hope of gaining a main tour card in 2023. He could bypass that stress by finishing seven in the ADT Order of Merit (OOM) or at least skip to the final stage of Q-School by finishing in the top-10 of the MENA Tour rankings come the end of the Beautiful Thailand Swing.

That will take something special at Blue Canyon Country Club which is set to host the second half of the four-event BTS, on the Lakes course (The Blue Canyon Classic from May 13-15) and the Canyon course (Blue Canyon Open, May 18-20).

“Missing both cuts is definitely not what I wanted but as long as you can learn from why you are playing bad then you can progress,” Davies said.

“In the next two events I'd like to play some golf to a higher standard and compete at the right end of the leaderboard. Just a couple of tweaks throughout the bag should be good.”